Sex in the Pan (not so ordinary)

Sex in the Pan – a really fun name for a dessert! This layered treat is made up of crushed Oreos, Cool Whip, strawberries, vanilla pudding and more! Fresh fruit mixed with rich chocolate and creamy vanilla is the ultimate combination of sweetness! 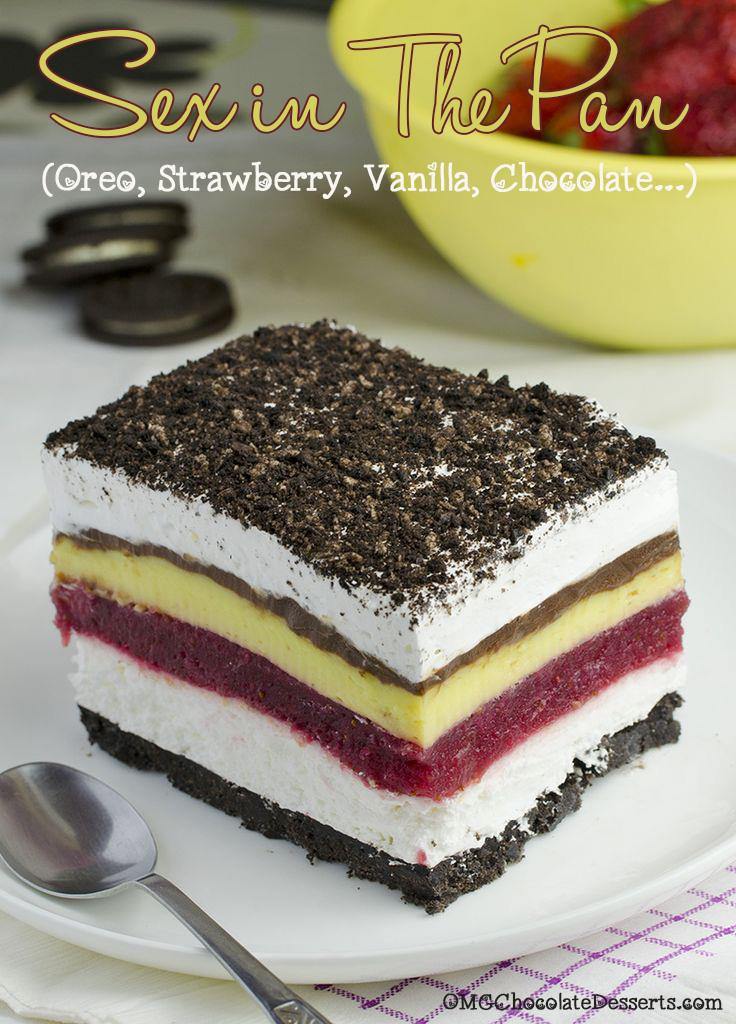 „It’s usually like that when modern food bloggers give names to their recipes” my husband was joking when I told him what was next on my dessert list.

„And what am I supposed to say to mom and dad when I take this piece for them to try? Mom, dad, try Sex in the Pan? he was laughing while he was watching the photo of his future treat on the internet. But when he saw what was soon to be on his plate, his tongue was hanging out.

„Wooow, now I know why it’s called like it is. It looks so good.“

And if you search a little on Google or Pinterest, you will find a few variations of this recipe. My favorite is on the blog jocookcs.com. Beautiful layers of vanilla pudding, chocolate and whipped cream with a bunch of grated chocolate over the last layer. It looks like heaven.

„You know what, Vera? It reminds me a little of the phenomenal Chocolate Lasagna you made before“ said my husband.

„Of course, but I will change it a little and it will be completely different“, I was happy already thinking about what kind of innovations I could make.

„Oh, no, improvisation again“, said my husband, who always wants the meals I make to be just as same as the picture, while I always like to make something „out of the blue“.

And of course, it was the same again. Very quickly, besides the basic layers of vanilla pudding and chocolate, I imagined Oreo crust and a beautiful little layer of strawberries that I just bought fresh of the market.

How to Make Sex in the Pan 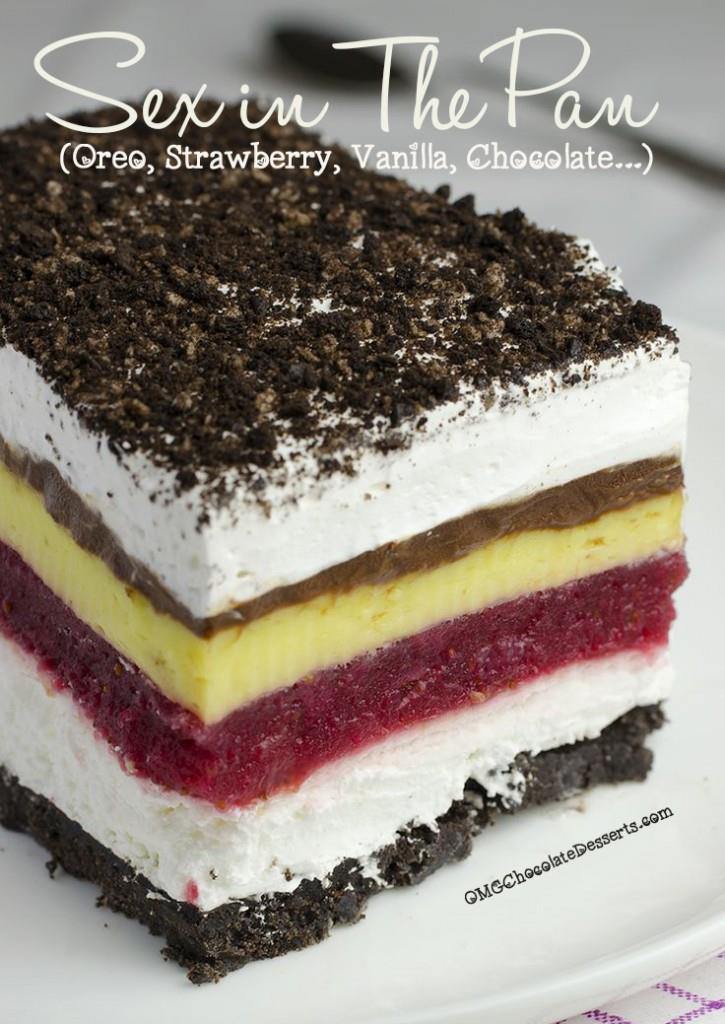 „Well that’s not even close to what you showed me in the photo“, my husband was disappointed as he was watching me cut of pieces of my version of Sex in the Pan.

But when he tried a piece of the cake while I was cutting it to make photos, there were no more words. In the next few minutes you could hear just munching 🙂

„Well, looks like your parents won’t get to know what Sex in the Pan is“ I was teasing my husband who cleaned up half of the cake in  the pan no time .

In the end, you will probably come to the conclusion that this is not your classic Sex in the Pan, but it is still a beautiful dessert. And a little  remark: if you decide to try this, reserve yourself a little more time because every layer that you make has to cool for a while in the fridge before you start with another. Enjoy!!!

Sex in the Pan – a really fun name for a dessert! This layered treat is made up of crushed Oreos, Cool Whip, strawberries, vanilla pudding and more! Fresh fruit mixed with rich chocolate and creamy vanilla is the ultimate combination of sweetness!

Every layer on this would be yummy on its own, but layering them together must be amazing. Pinned. Would love for you to come and share it tomorrow on The Yuck Stops Here! recipe link up @6pm PST.

This sounds so good, all the perfect sweets combined into one! Thank you for sharing it with us! Pinned to the party board. I can’t wait to see what you make next!

Thanks Marti:) See you next week at the party!

Oh Goodness!! I am speechless!!

Hugs from Freedom Fridays With All My Bloggy Friends!

This sounds amazing ~ I’ve pinned it to my Best Desserts board to try later.
I would be so honored if you would share this at Brag About It Link Party on VMG206.
Link here: http://bit.ly/1eDT32l

Holy cow, this looks amazing! Shared on FB and pinned – I don’t want to lose it!

Pining and sharing this as one of our features this week at Freedom Fridays With All My Bloggy Friends!! Thanks for sharing!

Holy amazing deliciousness!!! That is the best looking dessert I’ve seen in a long time! Can’t wait to make it! Thanks so much for sharing on Saturday Night Fever! PINNED!

Thanks so much for joining us at Freedom Fridays! 🙂

Looks great. Thanks for linking up to Sweet and Savoury Sunday, stop by and link up again. Happy Easter, have a great weekend!

May I know if there is a tutorial step to step in making the said recipe. Thanks

Hi Evelyn, you have the recipe.

Just made this… waiting for the choc layer to firm up right now, so I can add the cool whip & crushed cookies… and then wait some more. It’s almost 11pm here so looks like it’ll be refrigerating overnight not just 4 hours. (Unless I wake up at 4am and come sneak some…. haha.) Seriously though, this is going to be good.

Hi! So I stumbled onto your blog via the lemon truffles, and have been sort of drooling ever since. I saw this and had to ask…

You use strawberries, which is pretty awesome, but I’m wondering… what changes would need to be made for orange? I imagine it’d be similar for other berries (blueberries, raspberries, blackberries, etc)?

I can’t help you with that Nathan, I’ve never try it with orange. Let me know how it turns out.

I think I’m going to make this for a fundraiser auction this weekend but make a few changes… White Chocolate Pudding instead of Vanilla and make the strawberry layer with Junket Danish Dessert Gelatin because it has a better flavor and texture. Oh and use Marscapone instead of cream cheese. Super excited to see how it turns out. I made a different dessert from Pinterest last night that was fabulous (Chocolate Peanut Butter Dream Bars)!

I think i will make it at the end of the month for the last sun. when we have a big meal after Church and i think it would be a hit Just Can’t Tell Them The Name Of It ha ha !!

Im going to make this for husbands Birthday on the 27th.

My friend doesn’t like chocolate so I substituted vanilla oreos and white chocolate.
It was fantastic.

What gelatin did you use?

Did you use semi-sweet chocolate or milk chocolate for the ganache?

Thanks! Making it now for my father-in-laws birthday celebration. He’s a chocolate lover so hopefully he’ll love this!

Just a couple questions, will this keep in the refrigerator a couple days? And is it 8 oz choc in 1/2 C whip cream, or more whip cream?

Hi Susan, it will keep in the fridge for a few days. It’s 8 oz. chocolate and 1/2 cup whipping cream.

I haven’t tried this yet-but I think it might be a good wedding desert option if the recipe is multiplied. Can it be made ahead and frozen?