Are your kids constantly asking for chocolate at breakfast? If so, Nutella French Toast Roll Ups are the perfect response. These churro-style roll ups are such a treat! This french toast recipe with Nutella creates a sweet combination that you don’t want to miss! 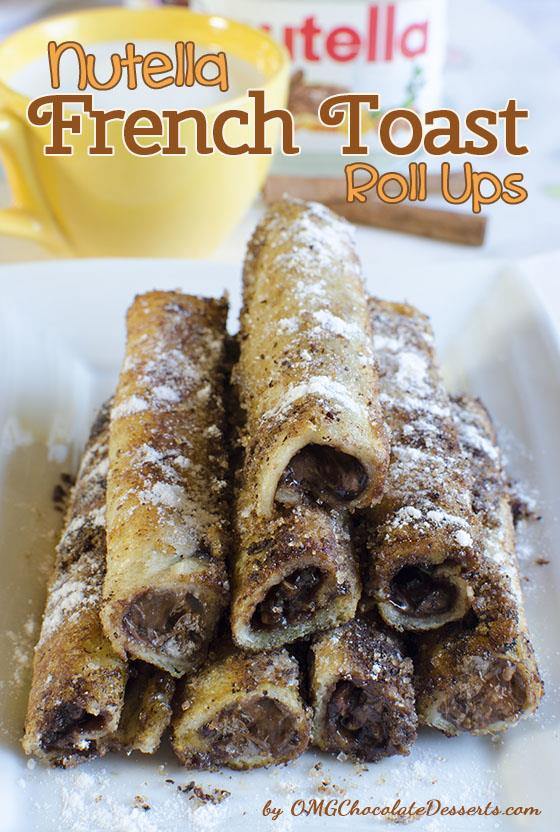 How about starting your day with Nutella French Toast Roll Ups? I say this is a perfect start, but not because I’m a big fan of Nutella French Toast Roll Ups, but because my husband prepared this yummy breakfast for me and my son Marco. I know, you probably won’t believe me, but I pinched myself a few times to check and really, it was not a dream 🙂

Even if the probability of my husband preparing a meal is really low, this morning, I woke up to the smell of toasted bread and cinnamon!

You must be wondering what the hell happened that Darko, a very busy web designer, found his way to the kitchen? I’m not completely sure that a pause in his latest project had something to do with this and made him get up from his computer and go to the kitchen. Anyway, Darko decided to go head to head with the complex task of making Nutella French Toast Roll Ups. Maybe it looks simple, but believe me, if you want this breakfast to be perfect, you need a lot of effort and patience, but my husband understood that.

“I thought this would be much easier”, he said as he sat in the chair visibly tired after a hour of “hard labour”. After beginning with great enthusiasm, he was quickly shaken up with some unpredictable situations on this difficult task. First he saw that things would not go so easy with the bread which was not really fresh. So, he had to go to the market and bye some fresh bread. The second disappontment came when a few rolles uncoiled while he was baking them on fresh butter, which tainted the beautiful yellow color and made the roll ups a little darker. And finally, a few of these things were a little burned! 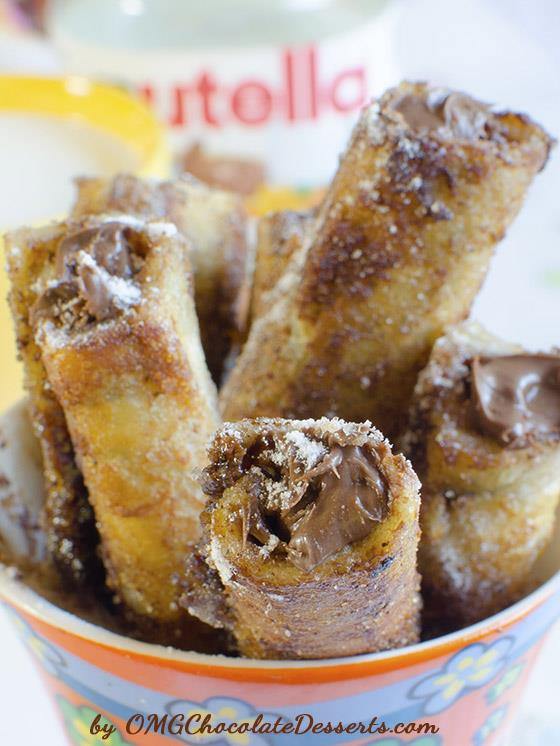 After all, when I tried Darko’s imperfect Nutella French Toast Roll Ups, for me, they were perfect. The only thing that made a bad impression was the mess Darko left behind in the kitchen. Of course, he expected me to clean It up 🙂

Are your kids constantly asking for chocolate at breakfast? If so, Nutella French Toast Roll Ups are the perfect response. These churro-style roll ups are such a treat! This french toast recipe with Nutella creates a sweet combination that you don’t want to miss!

Hello can I use whole wheat instead of white?

These look super good! Will most definitely make them for my brother and sister!!

I bet you could use whole wheat instead–it would just be denser, harder to roll, and maybe more likely to crack.

mmm…Can I have a dozen please? Look so delicious and tempting!

Thanks Sandra,
I really appreciate that you like these rolls.

These look fabulous. I love nutella. Stopping by to say hi! Thanks Vera. And I love your blog.

Made these this morning before school, and my son loved them. The sugar-cinnamon was way to “cinnamon-y”. Added much more sugar than 2tsp. Noah woke up super grumpy, but left for school super happy! Thanks!

Hi Abbie, I’m glad that your son like them.
Thanks for noticed that it was to “cinnamon-y”. Actually it was a mistake in the recipe,the ratio of sugar and cinnamon was inverse by a mistake. It should go 1-2 teaspoon cinnamon and 2 tablespoon sugar, I will correct that. I’m so sorry about that and thanks again;)

There could not be a more delicious or fun breakfast to wake up to!!

Especially whey your husband make it for you 🙂

Easy and oh so yummy! Used 9 grain bread and kids non the wiser. Thanks so much for sharing.

Question… What would you do to store these if you made several in advance? Or would you just have to do them all that morning? I have a 1 year old so spending 15-20 minutes in the kitchen is a challenge.

Hi Kimberly, maybe you could roll the bread with Nutella and keep it well packed in the fridge, and soak them next day in egg and milk mixture and fry. But I didn’t try that so I don’t know how it will work.
Have a nice weekend 🙂

I saw a video on facebook that showed them mashing bananas and speading them inside with the Nutella before rolling them up. That’s actually how I came across this recipe – it was in another language so I googled to find it in English haha. I definately have to try these.

These turned out fantastic!! My usually very picky nieces loved them and its so easy to make ???

Thanks, I’m glad to hear that.

Wow, just made these now they look amazing, thanks for the recipe, also ive just made nutella ones but do you think they would be nice if i did some peanut butter ones aswell instead of the nutella filling?

What can be the substitute for egg ?