Oreo Loaded Cheesecake Brownies are rich and fudgy homemade brownies topped with a layer of double stuf Oreos, cheesecake, plus more Oreo cookies on top. In other words, these could be the best brownies you’ve ever tasted! 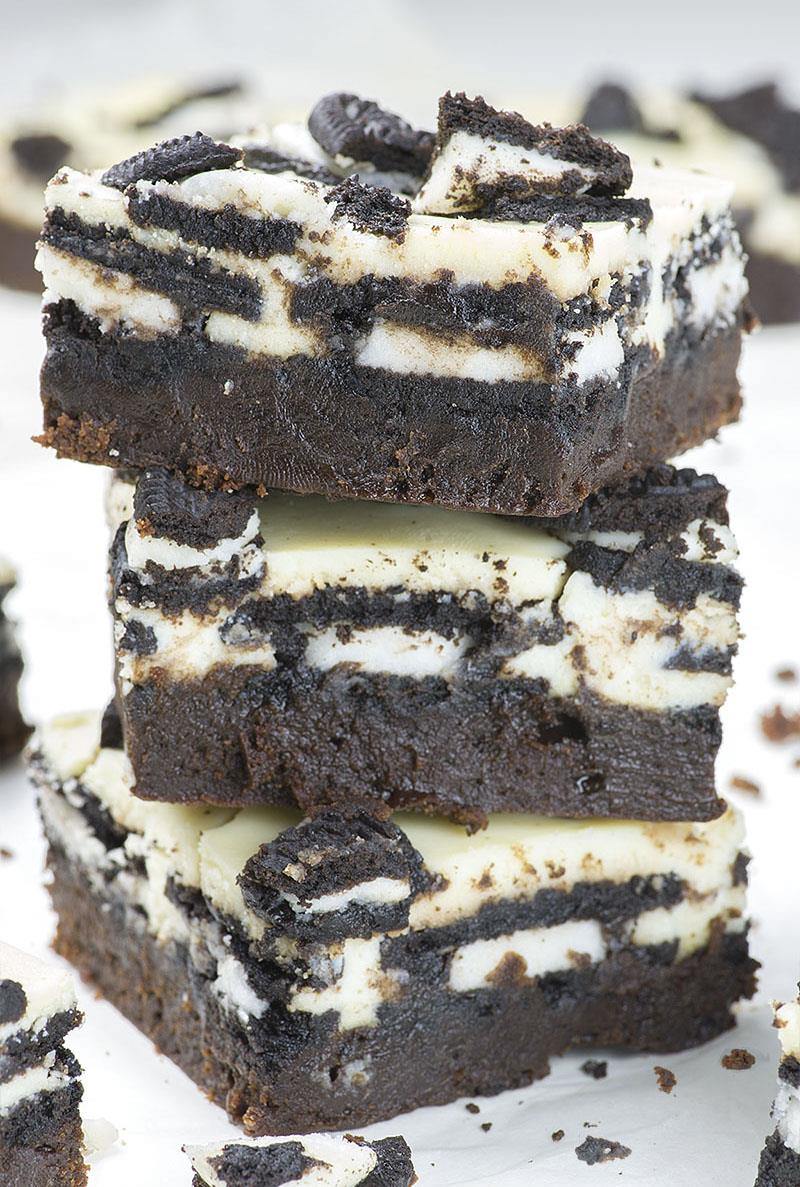 Oreo Loaded Cheesecake Brownies are really over-the-top! They are combo of two best ever desserts: brownie and cheesecake.  If you like your brownies to be ultra fudgy, dense,  chewy and rich, this brownie base is just like that. On the other hand, top layer is light, creamy and smooth cheesecake. But that’s not all. With this dessert you’ll get your favorite Oreo cookies in every single bite, too. Do you prefer Reese’s chocolate instead of Oreos? Check out this Reese’s Cheesecake, you’ll love it!

Given these facts, you understand why I said that Oreo Loaded Cheesecake Brownies are the best brownies ever. 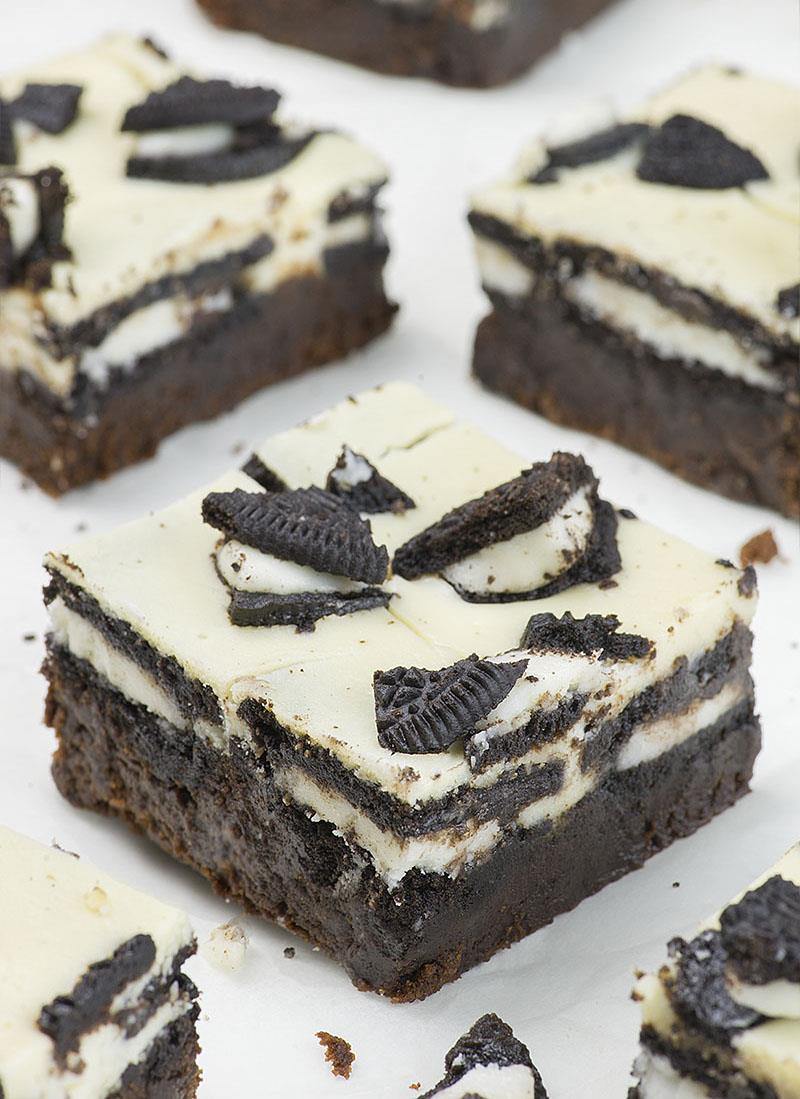 If you love cheesecake, if you love brownies and love Oreo (and who doesn’t?!), you’ll fall head over heels for these Oreo Loaded Cheesecake Brownies!!!

To get back to the brownie base, it’s as rich and decadent as it appear and completely homemade.  Perhaps you’re used to buy box brownie mix, but these homemade brownies are much better. You can make them in a short time whisking just a few simple ingredients. NO MIXER REQUIRED FOR THIS RECIPE!!!

This brownie recipe uses butter, chocolate, sugar, eggs, vanilla, flour, cocoa powder and a little salt. I recommend you to use real chocolate, not chocolate chips. Since quality chocolate is the key to the best brownies. 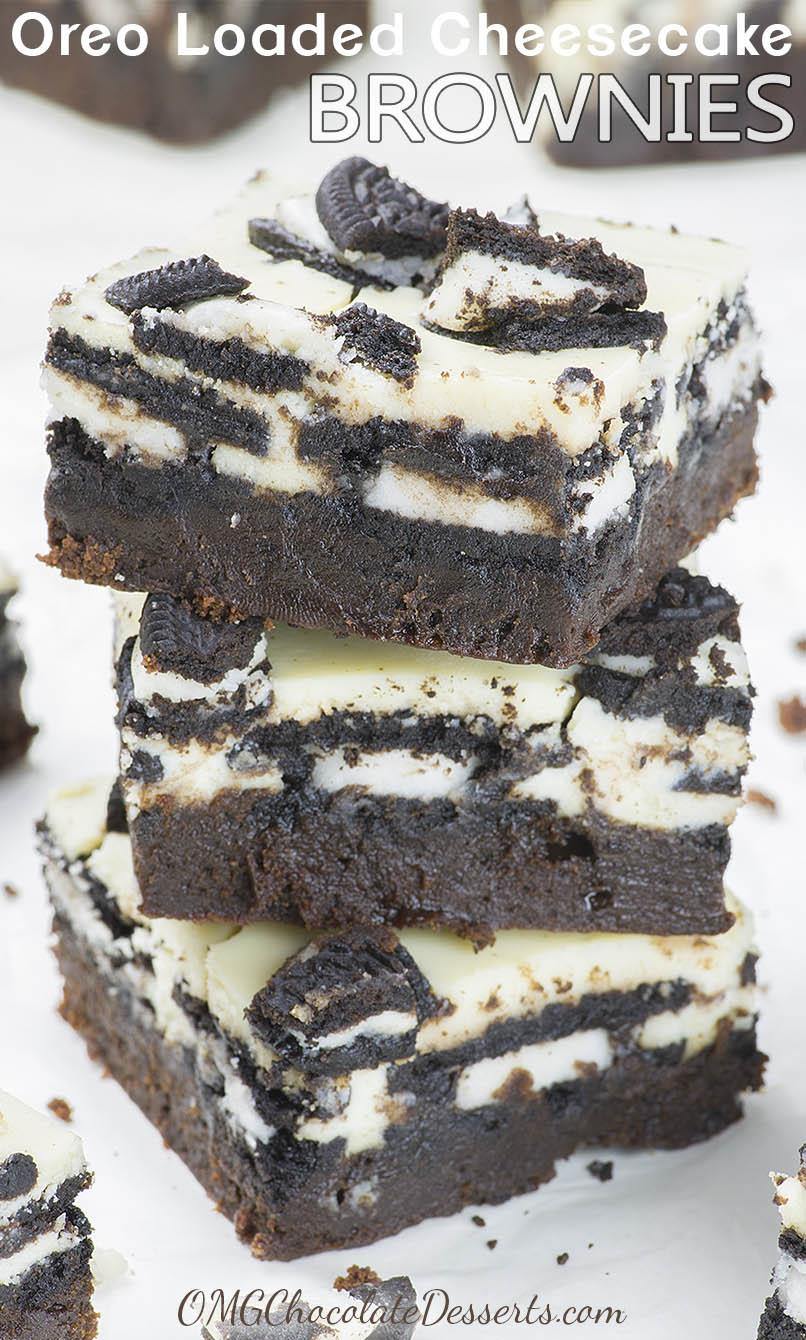 Besides chocolate, I’ve substitute some flour with cocoa powder for indulgent chocolate taste. In fact this brownie recipe doesn’t use much flour at all. That’s because too much flour results in a cakey texture and I like my brownies to be fudgy, really fudgy! That’s also the reason why I haven’t used baking soda or baking powder in this brownie recipe.

After all, if you’re looking for decadent brownie recipe, look no further! These Oreo Loaded Cheesecake Brownies are the ultimate!

Oreo Loaded Cheesecake Brownies are rich and fudgy homemade brownies topped with a layer of double stuf Oreos, cheesecake, plus more Oreo cookies on top. In other words, these could be the best brownies you’ve ever tasted!

I baked a pan lastnight but the brownies weren’t done all the way. Can I bake the brownies for 5-7mins before putting the cheesecake on top

How many does this recipe make?

For the cheesecake layer, is it regular oreos or can you use the double stuf that you used for the other layer?

Hi Hanna, I used double stuffed Oreo, but yo can use regular if you like.

Do you think this recipe could be doubled for a 9×13 pan?

are these freezer friendly?

Yes, you can freeze them.

Can box brownie mix be used instead?