Nutella Crescent Rolls are a simple and easy recipe with just 4 ingredients: puff pastry sheets, butter, sugar and Nutella, of course. If you’re craving a chocolate croissant, but you want to avoid the calories, these mini chocolate pastries are the ideal dessert for you!

A few days ago virtually a small war broke out in my house. On one side, there was me, who was trying to feed my two-year-old child with the foods that children his age are supposed to eat. On the other side, there was my little son Marco, who constantly refused anything, but his favorite baby food (oatmeal and chocolate porridge). The little gentleman even refused to eat by himself and food served in his favorite mug acting like a real little count!

“Enough is enough”- I said to the little prince “Either you eat what you are supposed to eat or you don’t eat at all!” I was even threatening him with my finger, but he couldn’t care less!

That’s when the battles begun! He gallantly refused eggs, bacon and tomato by spitting the few bites he had taken. 15 minutes later my next attempt to feed him was doomed to failure because of his continuous crying, whereas the third attempt that occurred 20 minutes after the second one ended in Marco’s sinking his head in the feeding chair. I was at utter despair!  Not knowing what to do I picked up one Nutella crescent roll I bought in the supermarket the day before. I offered it to Marco, so that he would eat something other than his baby food. My husband and I just love those delicious Nutella crescent rolls that Marco wouldn’t even look at until now. To my utter surprise, Marco took a bite and started chewing it like nothing ever happened! And it wasn’t just a single roll! He continued eating the rolls for the next 15 minutes until he was full asking for some water to drink. It may not be the perfect meal, but at least it wasn’t baby food!

To honor those Nutella crescent rolls from the supermarket I decided to make similar ones and celebrate my partial victory. I remembered a recipe that was very popular on the Pinterest and I found it very quickly. Divine Nutella crescent rolls from Novice Chef!  I modified the recipe just a bit and soon the delicious aroma of my sweet little Nutella rolls spread across the kitchen!

As soon as they cooled off a bit, full of hope and pride I offered one roll to my little prince! And guess what, my little son just looked at it, turned away and moved on!

Thus, the truce was over and the war was still on, but postponed for a while! 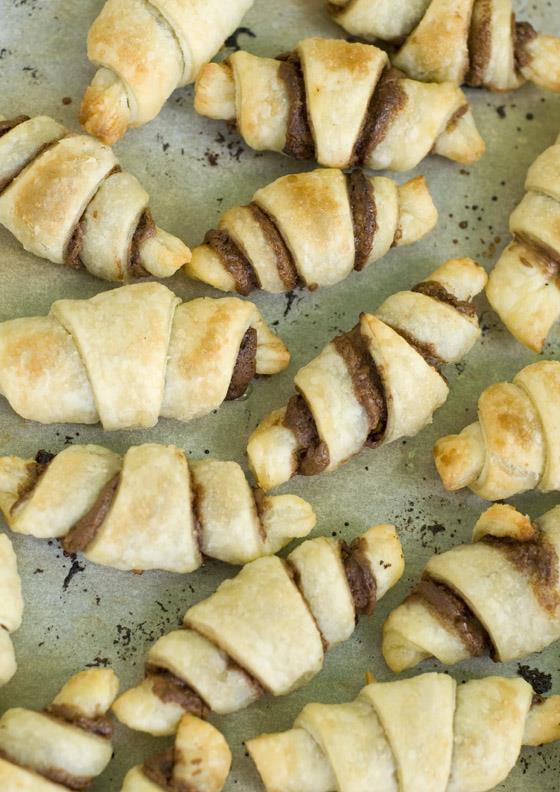 Nutella Crescent Rolls are a simple and easy recipe with just 4 ingredients: puff pastry sheets, butter, sugar and Nutella, of course. If you’re craving a chocolate croissant, but you want to avoid the calories, these mini chocolate pastries are the ideal dessert for you!

These look so lovely in the picture, but they are not so easy to make as the recipe would appear. If, I make these again I will definitely not brush with melted butter as it only made the crescents flatten out. The flavor is not all that stupendous either and I love Nutella.