Do you ever have one of those days when you simply have to eat something sweet? If the answer is yes, I might have the perfect recipe for you – Snickers Chocolate Fudge! It’s extremely easy to make, and so sweet and tasty that just one piece is enough to satisfy the most intense sugar cravings. 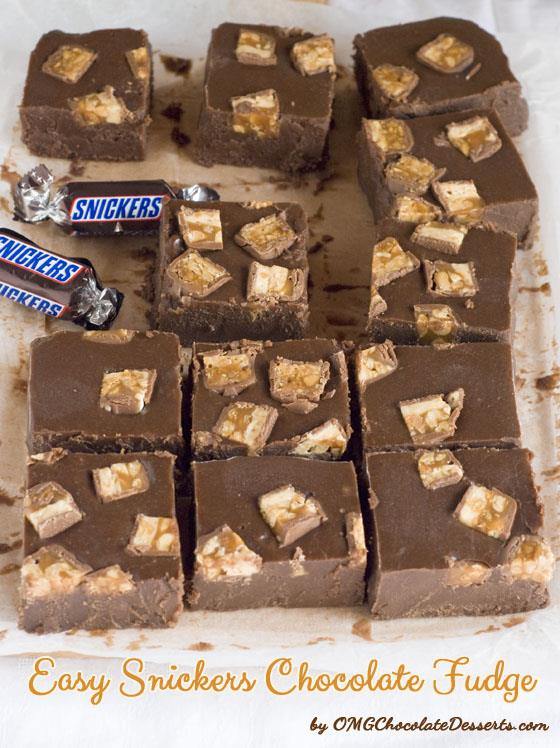 A few days ago my husband went thorugh a similar situation. I don’t know if I told you that he practices badminton and that not long ago he became a badminton coach! This would be great news, if it weren’t for badminton tournaments he occasionaly attends, which sometimes last all day long. On such days he would usually come home feeling so exhausted that he would go straight to bed. The next day when he woke up the first thing that he would say to me is “Vera, is there anything sugary in the house?” And this is just a beginning of a day of overeating and gobbling  chocolate bars, cookies and anything sweet he can find.

Every time I foresee that this is going to happen, I turn to, as I have already mentioned, chocolate fudge! This time I decided to double the stakes! I added Snickers chunks to a semi-cooled  fudge base and put it in the fridge to cool completely as I waited for Darko to wake up and embark on his usual sweets quest. 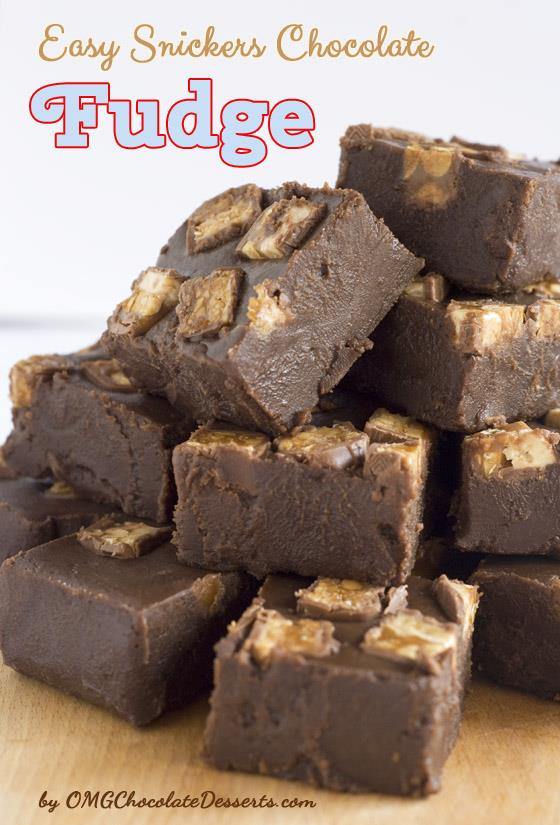 No sooner had I finished cutting the fudge, than my husband appeared on the door uttering his favourite line. Seeing the fudge he grinned with content and stuffed two squares in his mouth. Two hours later it was time for another round! This time he skipped his usual quest and immediately opened the fridge and went for the fudge. A couple of rounds later he concluded that Snickers chocolate fudge is just what he needed to satisfy his sugar cravings on days following the tournament.

To make things even better even my son, Marco, profited from the whole situation, since he managed to keep his candies and sweets that would otherwise vanish into thin air 🙂 .

Do you ever have one of those days when you simply have to eat something sweet? If the answer is yes, I might have the perfect recipe for you – Snickers Chocolate Fudge! It’s extremely easy to make, and so sweet and tasty that just one piece is enough to satisfy the most intense sugar cravings.

where is the recipe ?

Hi Maria,
Sorry! You can check now! I’ve made some changes!
Regards

Hi i am wondering if these have to be refrigerated? i am wanting to make and send them to my husband overseas!

Dear Danielle,
I keep them in the fridge because they have milk and butter, so I think you better don’t leave them out the fridge that long.

[…] Recipe and Photo credit to omgchocolatedesserts.com […]

Hi Ana, you can use other chocolate bars and I haven’t tried this with butterscoth chips so I can’t give you any advice about that.

[…] I decided to check all the fudge recipes that I had on my blog until now. Unbelievable. Only one fudge recipes  in almost three years of working on a blog that has the name “Chocolate Desserts”. Really […]