Like all little kids, my son Marco is thrilled by cartoons. Since he was a baby, since the first cartoon he saw on the Baby TV channel, the most important thing in his life (besides chocolate) are cartoons. But, not just any cartoon! Marco, of course, has a list of favorite cartoons and he can easily spend hours watching them. And in first place on that list is a likable cartoon by the name of “Tricky Tracks” on the Baby TV Channel. And if you have not seen this beautiful cartoon yet, it is about a beautiful train which drives it’s friends, the animals, around and around solving some little problems in the meantime.

Right after this likable little train, second place on Marco’s list is held by Peppa Pig with it’s cute family of pigs. Another great cartoon and another of Marco’s favorite characters is a little pig named George and his dinosaur. And so, thanks to Tricky Tracks, Marco became mesmerised by trains. All his favorite toys  are, of course, trains, and all of his t-shirts must have trains! Believe it or not, even the first word that he said was “choo choo”. Imagine that! Not “mommy”, not “daddy”, but “choo choo”.

Now, you must be wondering why I’m telling you this. A few days ago my sweet little son was having his third birthday party. Such a wonderful occasion meant that there had to be a huge cake for him and his little buddies. And since Marco’s two favorite  things are trains and a family of pigs, there was a great idea for a cake. A sweet multi-colored train with wagons of chocolate on which smiling pigs will be sitting – Choo Choo Chocolate Birthday Cake . Of course, something like that was easy to imagine, but hard to do. Real hell if you are not a professional cake decorator.

But what could prevent a mother from making her favorite son happy? 🙂 Of course, it came at a price. The first thing that was standing in the way of Marco’s cake was a few hours of playing with colored fondant. Somebody had to make all those decorations in the shape of Peppa, and besides all of that, somebody had to make parts like the wheels of the train, the eyes, the railroad… Not an easy task by any means and when you have a restless helper by your side, anything that you worked so hard to make  could go wrong in the blink of an eye. You can only imagine how it all looked. As for making the cake itself, there was the good old Chocolate Chocolate Cake, so everything went along smoothly. But when I was supposed to make a whole composition of trains from the delicious cake, that was the biggest problem 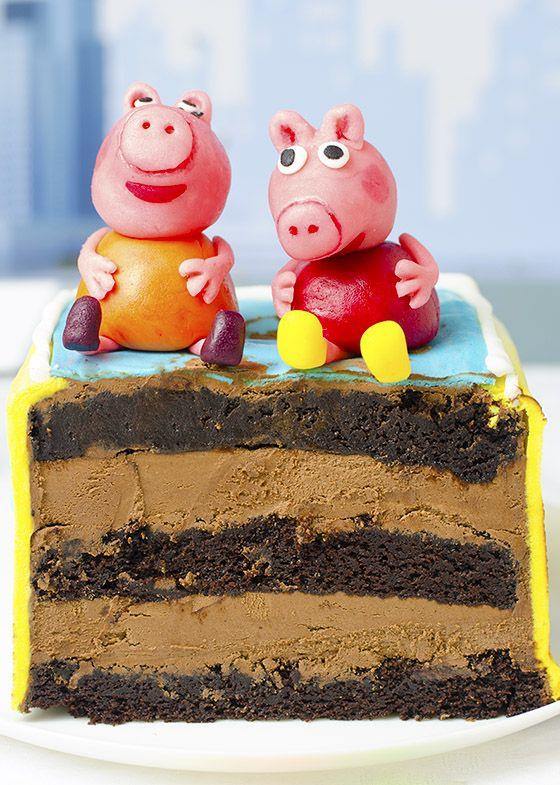 But after two days of hard work, finally, on my table, there was a whole train driving little pigs right to Marco’s third birthday party. Choo Choo Chocolate Birthday Cake was ready to go!

But, wait a minute, what does the main train dispatcher, my son Marco, say about this? And when he came in the room, his eyes were glowing with excitement! Wooow, Chooo Chooo! That was, of course, the first thing  he said looking at me and at the cake with astonishment! At that moment, all the troubles I had making this cake were gone.

Wow what a cake! My daughter’s 3rd bday coming up and she loves Peppa Pig. Wish you could make her one.

Subscribing. I love to cook, and learn and share ideas. TY. Looking forward to my experience here. Jeff