Do you want a delicious dessert without having to do hardly anything? Then Sopapilla Cheesecake Bars are the solution for you. A beautiful combination of crescent rolls and cream cheese, with just a little effort, becomes a cheesecake recipe you will gladly come back to. 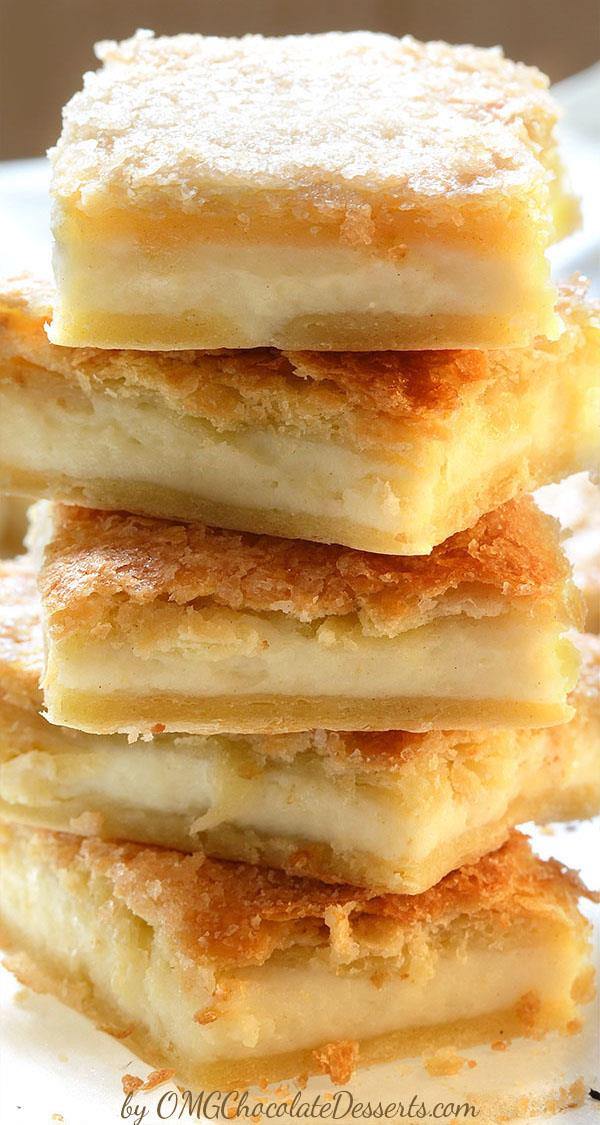 OH, no! What do you do when you catch yourself watching the same photo of Sopapilla Cheesecake Bars while you are drooling, but everything you are missing for the recipe is a spoon of cinnamon?  I really don’t know how a woman can call herself a food blogger and doesn’t have an inkling of cinnamon in her kitchen. Of course, taking the car and going to the market for just a pinch of cinnamon didn’t look like the best of ideas.

Well, maybe the famous Sopapilla Cheesecake Bars can exist without a spoon of cinnamon. On the other hand, I will be completely fair, I will delete the word “Sopapilla” and call them Just Ordinary Cheesecake Bars. 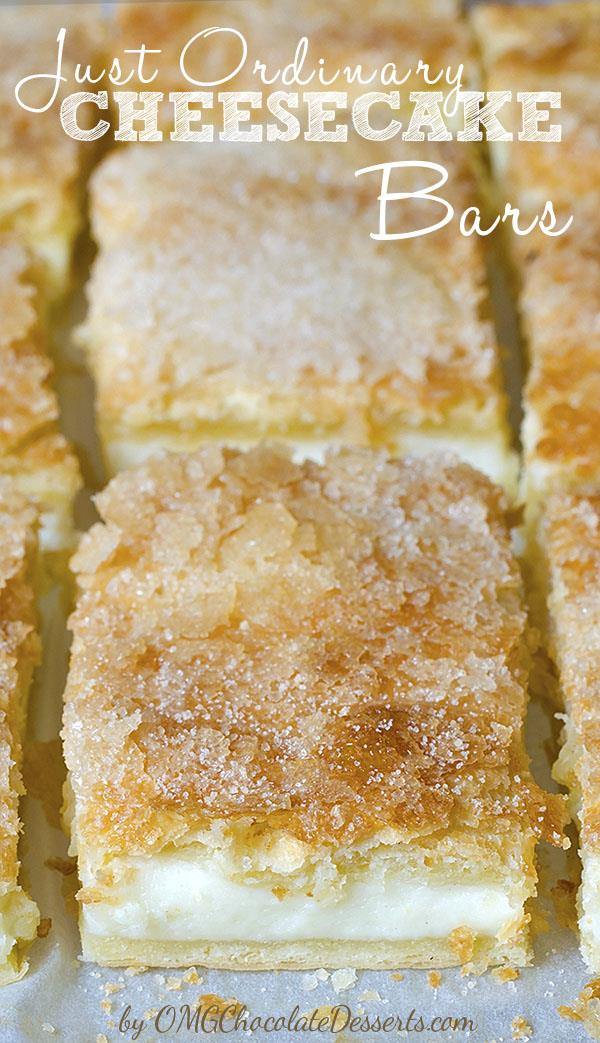 Since everything else was there, it was time to check the beautiful cheesecake bars. They look so irresistible and believe me, the taste is also like that. One thing is sure, this dessert is rightly called “easy baked” so the refrigerated crescent rolls, cream cheese, butter, vanilla and sugar very quickly began to assume the shape of the beautiful bars I that were on the photo and that I liked so much.

The only thing left was that my husband and I check why these simple cheesecakes had so much fame. And how much we really liked them, well, there was not a piece left of this Divine cake. It didn’t even live to cool off.

“You know, maybe you should try this with the cinnamon in the next days, just to compare” said my funny husband munching the last piece of my Just Ordinary Cheesecake Bars.

Do you want a delicious dessert without having to do hardly anything? Then Sopapilla Cheesecake Bars are the solution for you. A beautiful combination of crescent rolls and cream cheese, with just a little effort, becomes a cheesecake recipe you will gladly come back to.

Delicious dessert! Can you clarify further how to seal the top dough with the bottom dough. Thanks.

Yummo!! My son lives cheesecake this is a treat

Do you need to poke some holes on the top layer of dough to let the steam escape?

If I make my own crescent roll dough, will it work as well?

Hi Darin, you could poke some holes.
I don’t how this would turned out with homemade dough, if you you try let me know.

I see it requires 2 tbls of “Unsalted” Butter. Can I use just reg butter, or is that going to really through it off?? I’m hoping to have these for desert tonight, it looks soo……..Good!!! Thank You in Advance for your help!!! =)

Hi Susan, you can use regular butter.

Can I make these a day ahead of time?

I noticed the recipe doesnt use eggs? How many eggs should I use? I’ve never made cjeesecake without eggs

I’ve made these before, and they do not require eggs. The filling is perfect if you follow the directions. This isn’t meant to be a full-fledged cheesecake, though it is as delicious as one.

I just made the Sopapilla Cheese Cake Bars, but the recipe I used had 1 C of sugar in the cream cheese and 1/2 C of butter and 1/2 C of sugar on top! I will try it this way next time and feel a lot less guilty!

Hiiiii I make this with fat free cream cheese and a substitute sugar (“0” calories), i.e. NO SUGAR and a “shot” of fresh squeezed lemon. Sprinkle the top of the bars w a little cinnamon 🤭🤭

How many servings does this make?

Hi Courtney,it depends how large slices you cut. This is baked in 9×13 inch pan. you can make about 12 servings.

Do these bars need to be refrigerated? If so how long can they sit out before they go bad? I’m taking them to a cookie swap, so much better than cookies 😀 Thanks!

Hi Jessica,I won’t keep them more than a day at room temperature.

Just had to tell you these babies are amazing! Everyone loved them. I’m making another batch to take to my family dinner on Christmas. I decided to add one more package of cream cheese, 1/4 cup more sugar, and 1 tsp more of the vanilla. The filling was so good I felt a little more would make these even better! Thanks for sharing?

I’m wondering how this would work with puff pastry instead of crescent rolls? Has anyone tried that?

Hi Dana, you can use puff pastry.

Can these be frozen? Would like to make for Christmas but need to bake ahead of time.

Hi Annette, I haven’t tried to freeze this, so I can’t help you.

Do you think this would work if I put cherry pie filling inside with the cream cheese mixture to add another dimension of flavor? And if you had cinnamon at what point would you add it?

Hi Christine, I don’t how it will turn out with cherry pie filling. Maybe you could prebake bottom dough layer for maybe 10 minutes, cool a little and then add filling(because I’m not sure will it bake enough if you add cherries).You can stir cinnamon and sugar and sprinkle on top.

What about adding chocolate to the cream cheese? How much do you think would be good? 1/4 cup of cocoa?

HI Laurie, you could try that way.

Could you add some lemon juice and zest for a lemony taste? or would the lemon juice mess up the cream cheese?

Hi Frank, you can add it. Many similar recipes use lemon juice for the filling.

I have made this since buthe 80’s but only for topping I use a cinnamon sugar mix and egg yolks in cream cheese mix and use eggwhites on top not butter. Much better.

[…] You can find complete recipes of this JUST ORDINARY CHEESECAKE BARS in omgchocolatedesserts.com […]

I live in Ireland and they don’t have crescent rolls or anything like it. What can I use?

I live in Ireland and we don’t have crescent rolls. Is there something else I can use?

Hi Rose, you can use puff pastry if you have that.

where does the cinnamon go if you have it?

[…] kick recently, even though it’s been entirely unintentional.  Last week, I made sopapilla cheesecake bars (which are incredible and way too unhealthy), and this past weekend I made chocolate chip banana […]

This recipe is called Crestent Cheese just done a bit different. The one from Pillsbury calls for an egg yolk in the cheese cake mixture and lemon juice added. On the top you add the egg white and sprinkle with cinnamon and sugar mixture. No butter added. Thanks

I used Almond Extract instead of Vanilla. OMG does it come out so awesome! Try it that way once!

Can I use pre made pie crust instead?

[…] I also had to have it on my blog. If you missed it by any chance, then I have to remind you of my Just Ordinary Cheesecake Bars recipe. It’s still one of the most popular recipe on my blog after all these […]

I have made these for years. I always add a canned pie filling fruit of some variety. Raspberry / Blueberry / Cherry / Strawberry even Lemon. My favorite is Raspberry tho. Just add it on top of the cream cheese mixture and Continue on with directions. ?

Fruit roll ups work beautifully too . Same procedure as yours.

I’m on keto, can I substitute an almond meal base?

Hiiiii I make this with fat free cream cheese and a substitute sugar (“0” calories), i.e. NO SUGAR and a “shot” of fresh squeezed lemon. Sprinkle the top of the bars w a little cinnamon 🤭🤭