Nutella Filled Baked Donuts – homemade baked donuts overloaded with gooey Nutella filling and crunchy cinnamon-sugar coating are a mind-blowing treat for all donut lovers. You can now eat two of your favorite things together with this donut recipe: NUTELLA and DONUTS! 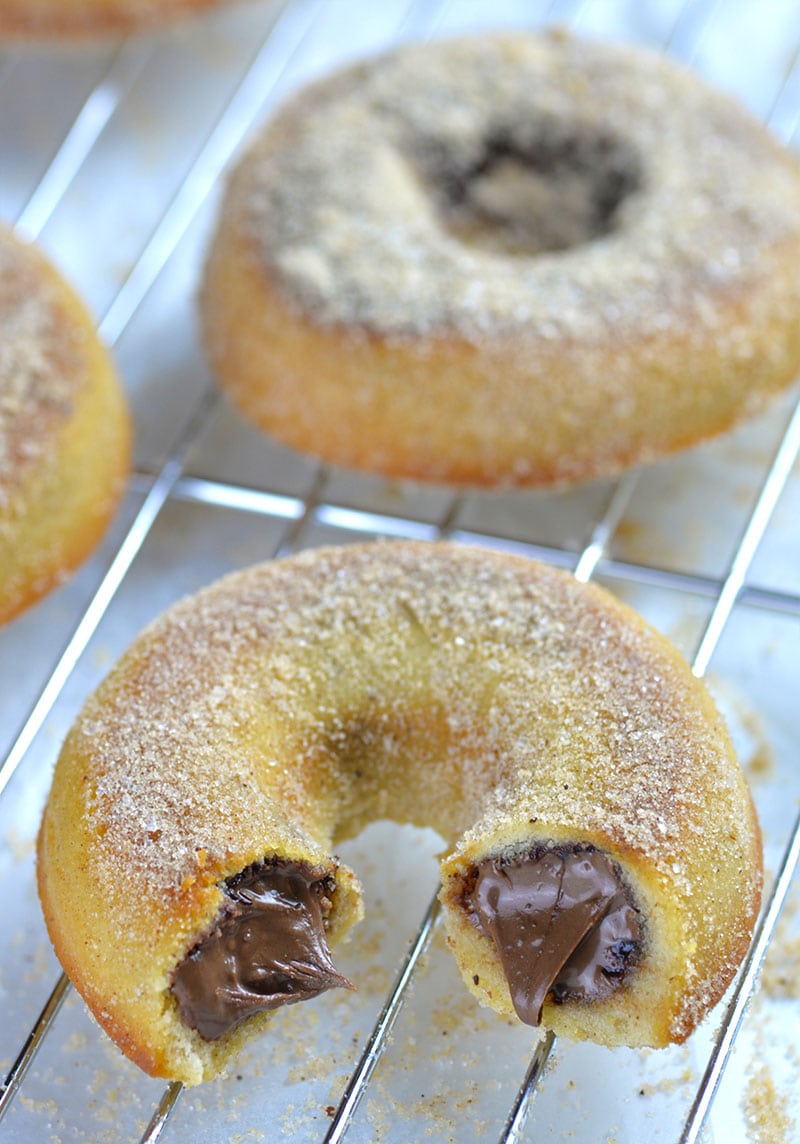 However, you might think, “OK… I could just spread Nutella on a regular baked donut. What’s so special about this one?” Sure, you could do that, and I’m sure it would be delicious, too. But, not the same!

These Nutella Filled Baked Donuts are super delicious! Nutella became super gooey, baked together with donut, and it’s just not the same when you spread it on top of donut, believe me! And it’s much less messy to eat this way. You can pack a few donuts in a lunch box and take them to work. It would be delicious snack.

The best part (beside Nutella filling, obviously) is that these donuts are baked, not fried. That means, much less work involved, but much less oil, too. 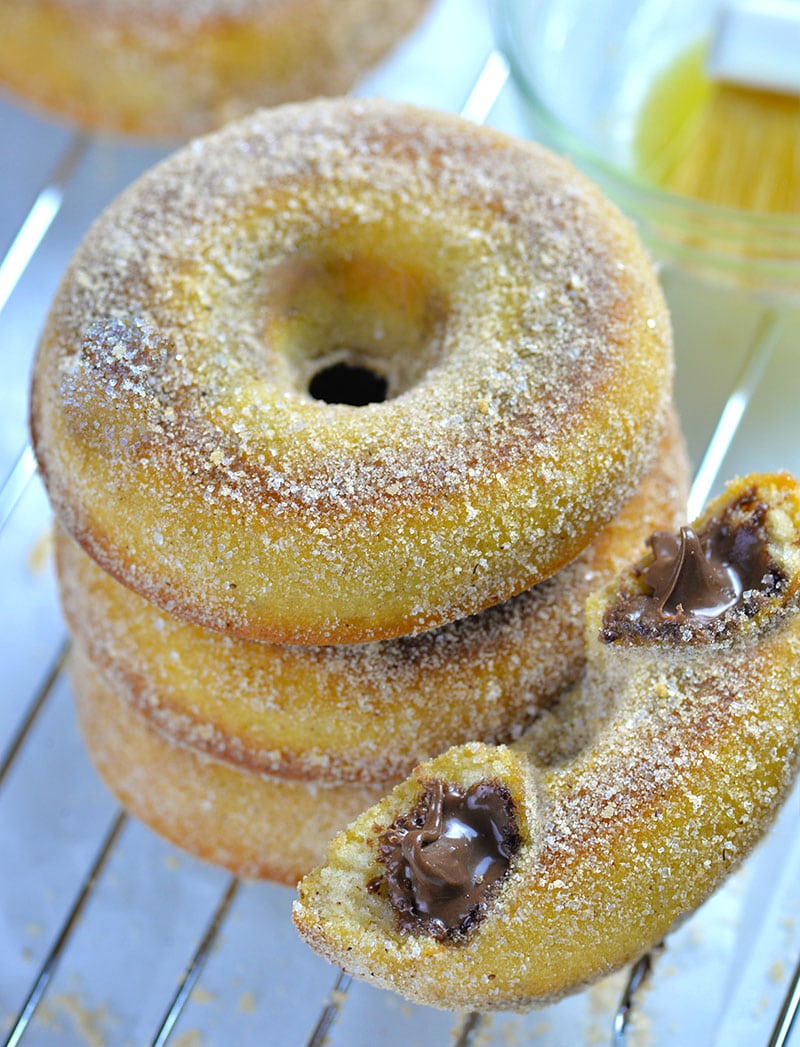 However, donut batter is quite standard: flour, sugar, egg, butter, milk…If you’ve ever made homemade baked donuts, then you’re familiar with these.

But, these Nutella Filled Baked Donuts are anything but ordinary. Warm and gooey Nutella filling takes them over the top. Crispy cinnamon-sugar coating on the outside and creamy filling on the inside…. YUMMMMMMMM!!! Completely mind blowing!

Follow me on Instagram and tag #omgchocolatedesserts so I can see recipes from OMG Chocolate Desserts  you make.

Now, if you’ll excuse me, I need to go wipe some of this drool off my laptop keyboard. 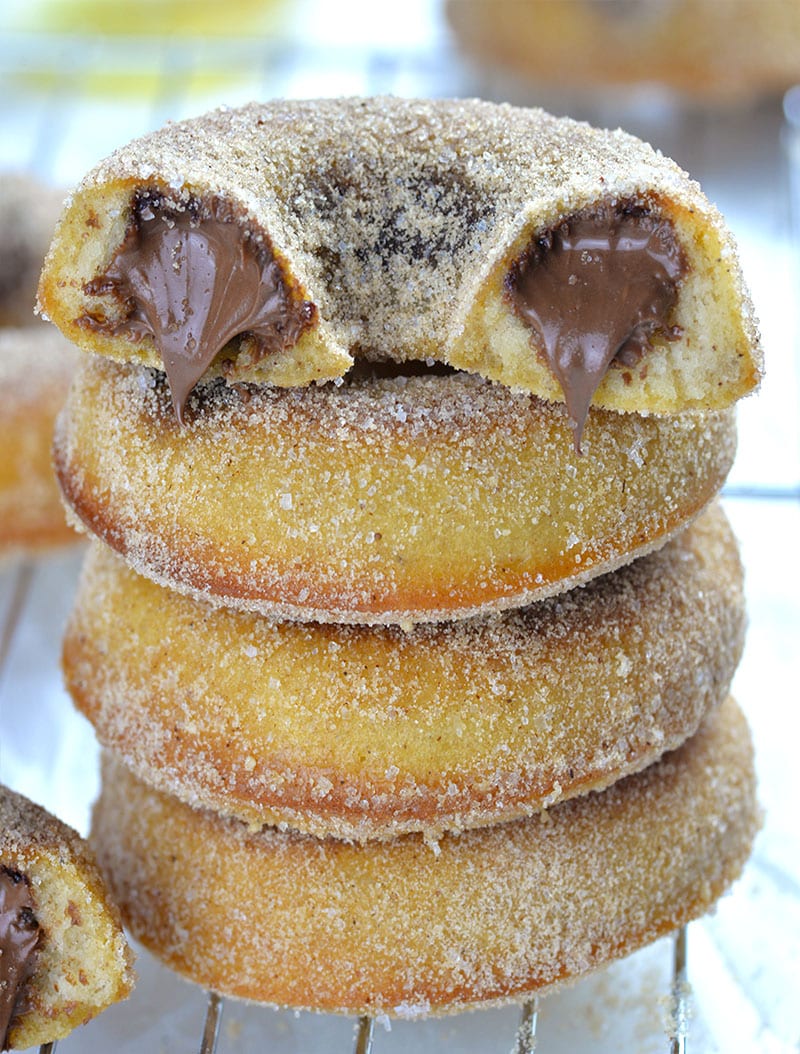 Nutella Filled Baked Donuts – homemade baked donuts overloaded with gooey Nutella filling and crunchy cinnamon-sugar coating are a mind-blowing treat for all donut lovers. You can now eat two of your favorite things together with this donut recipe: NUTELLA and DONUTS!

I would love to see a video on how to make these.

Do you have a recipe for this for fried doughnuts?

The dough was extremely sticky and difficult to work with. I don’t know where I went wrong.

Hi
Could I use egg replacer? I wanted to make this an egg free recipe.
Also, could I use plant based milk ?

Hello this recipe looks yummy, I don’t have Nutella but I do have some lemon curd and was wondering if it would work using that instead.

Hi Lida, sorry I haven’t tried it with the lemon curd!

Could you make this with a custard filling instead?

Hello,
Do you know if/how substituting almond milk for the milk would affect them?

I have tried this twice and the same results the dough is sticky and difficult to work with, are the measurements in the recipe correct?

This recipe is so off. It does not come out looking like the video. The dough is very thick and tacky. I was unable to pipe it and just had to form it manually in my pan. I doubled everything to make a dozen and somehow it only yielded 8 donuts. Filling the molds as shown in the video and directions doesn’t not yield as perfect and petite looking of a donut like the video. Mine were larger looking. Also, the flavor is not bad but could use more taste. Sugar? Salt? I don’t know. The measurements for the cinnamon sugar topping is also in accurate. I had to dump way more sugar into the bowl to get enough to dip the donuts in and for it too look like a whitish brown coating like the pics.